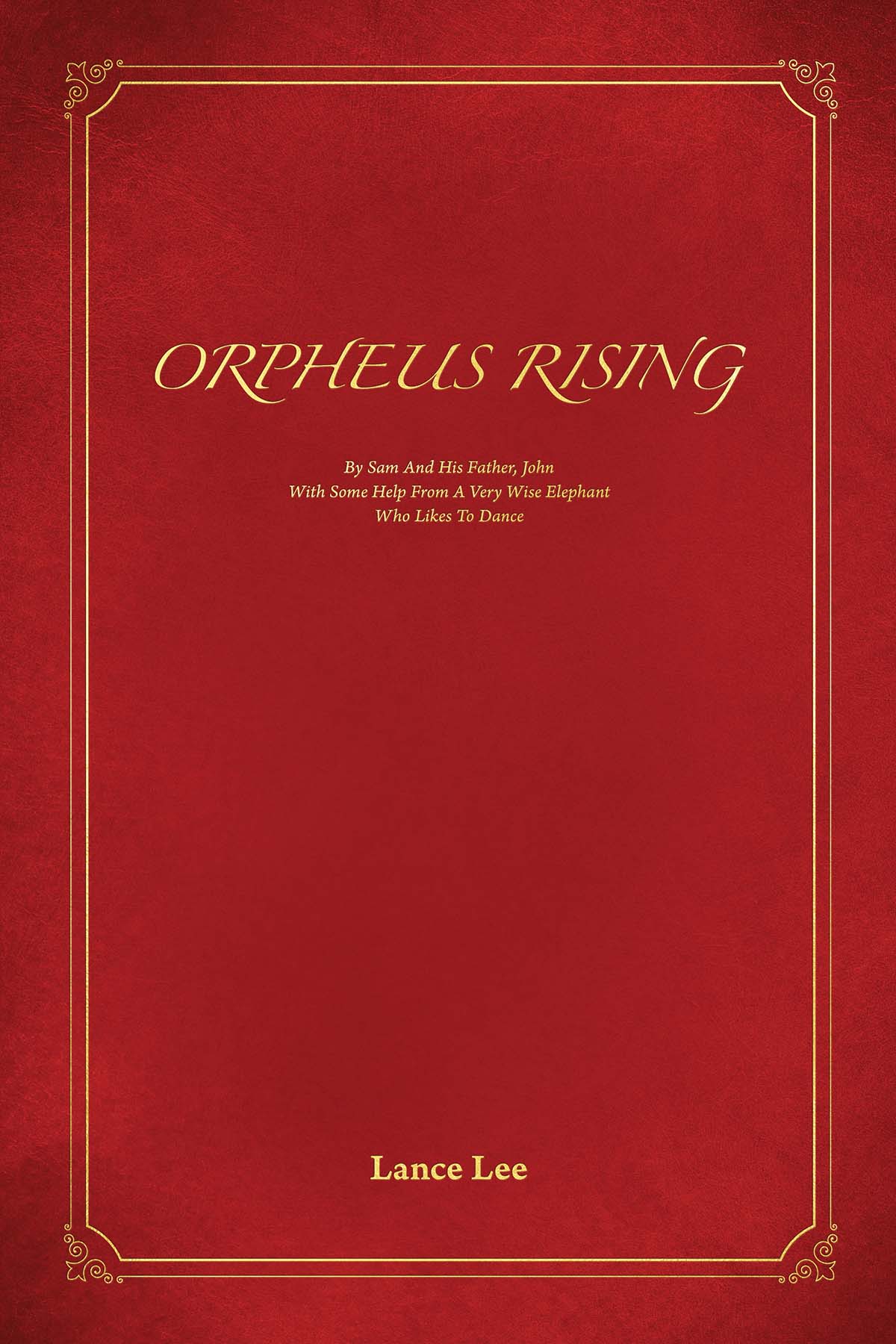 Lee’s curious, myth-touched adventure, which reads like a blend of The Phantom Tollbooth, Charlie and the Chocolate Factory, and a modern-day Orpheus story, finds a lonely boy named Sam stuck in the middle of nowhere with a father, John, who grows greyer by the day. The two spend their time silently doing chores, and every night they share the same terrifying nightmare, though neither speaks of it. One day a mysterious book arrives, and Sam discovers that what happens in it can come true in real life. Inspired, he uses its strange power to change everything for himself and his father, opening the door to a dangerous world where nothing is as it seems. With the help of Sam’s imagination they team up—John somewhat reluctantly—with a wise and distinguished elephant who loves to dance. Together, the three embark on a quest to save Sam’s mother from the afterlife.

Though aimed at middle grade readers, Orpheus Rising at times feels like a mature philosophical contemplation of death, steeped in magical realism. There are also moments of true terror, and some of the imagery— coupled with the book’s fantastical yet ominous illustrations—might be unsuitable for readers who scare easily. At the same time, the stakes can be almost comically low, as when an enchanted object renders any conflict avoidable. Elements of the plot require a thorough understanding of the rules of poker and the intricacies of sailing. Real emotion powers Sam and John’s adventure, their journey as much about the relationship between father and son as it is finding Sam’s mother. Sam and John begin the novel torn apart by her absence, which John spent his entire childhood refusing to explain. Their quest to save her teaches each about the power of honesty, trust, and love. Lee’s vivid imagination shines through each chapter of their quest, and his quirky characters will keep readers who appreciate fabulist adventure hooked throughout.

If you love to read epic fantasy adventure stories, grab yourself a copy of Lance Lee's Orpheus Rising. Ten-year-old Sam lives a humdrum life alongside his father, John. Feeling isolated and lonely, Sam and John start having nightmares where they share the same scenario. After the newspaper delivery man, Mr. Nicholas, hands over a mysterious book to John, Sam discovers that whatever he draws or writes in the book comes true. When a dancing elephant in an Edwardian suit comes to life, Sam and John realize that they live in Sam's imagination. Sam names the elephant Lepanto, and the three of them undertake an epic quest to rescue Sam's mother, Madelyn, from Dread City while traversing a Far Land of Fear. But they must brave an Upside-Down ocean, a Sea of Faces, a riddle-loving snake, and much more.

Author Lance Lee's whimsical fantasy adventure tale blurs the line between imagination and reality, enchanting you through a wide range of emotions. Orpheus Rising fills you with a sense of wonder and awe, deftly showcasing the importance of believing in your dreams and pushing yourself to attain them. The contrast between Sam's and John's personalities makes for an interesting dynamic. While John, at times, seems to succumb to the struggles of their journey, Sam continues to carve himself a path out of sheer will and vivid imagination. The illustrations by Ellen Raquel LeBow provide an added visual aesthetic to the story. I thoroughly enjoyed Orpheus Rising, and I highly recommend it to young adults.

Life is a journey. No one understands this better than ten-year-old (almost eleven) Sam and his father, John. They are destined for a journey of widely imaginative proportions as the two set off to rescue Sam’s mother, Madelyn, from “Far Land of Fear” and “Dread City.” Could this journey take them to the afterlife, a dangerous, fearful world where only those who have died can venture and never return? Written for the adventurous and imaginative reader of all ages, Lance Lee’s Orpheus Rising is a legend, a mythological adventure set in the modern world. In Greek mythology, Orpheus mourns the tragic death of his wife, Eurydice. In his grief, he ventures into Hades (hell) to reclaim her. Taking this theme and plot into a modern setting, the author has expertly woven a tale of grief leading to fantastical adventures that parallel the original Orpheus legend. Sam and his father, John, are grief-stricken over the loss of Sam’s mother and they can barely function without her. Following dreams (that they both share), a mysterious and magical book, and the overpowering desire to restore Sam’s mother to their lives, the father-son duo go on almost unbelievable adventures, not so different from other classics like Jonathan Swift’s Gulliver’s Travels.

Using interesting number associations, like the ever-powerful number three, incorporating complex, multidimensional words like ubiquitous, and the constant reference to time (perhaps like the number three this is a biblical reference that stipulates there is a time (season) for everything), this book reads like a classical era legend, a myth of many proportions. It’s also something like the complex card game of poker; each plays an educated move with multiple strategic elements. And, then there’s the Book – the mysterious book that arrives in the mail and ultimately leads them on unfathomable adventures, good and bad, until they find the ultimate treasure: Sam’s mother. The Book, another biblical reference to the Book that leads readers on adventures that are both good and bad? Ultimately, the story and plot, driven by one specific goal, are powered by love. Lance Lee’s Orpheus Rising is a compassionate and fascinating tale of mythological proportions.

Orpheus Rising: By Sam And His Father, John, With Some Help From A Very Wise Elephant Who Likes to Dance

Lance Lee’s fairytale—essentially a whimsical reimagining of the Orphic myth—follows 10-year-old Sam and his father into an imaginary otherworld where they attempt to locate and save Sam’s beloved, deceased mother.

Sam lives with his father in the countryside, where—when he’s not being homeschooled—he’s kept busy doing chores, including milking the cow, collecting eggs from the chickens, and managing the garden. As busy as he is, Sam’s life is empty. His writer father John is mired in a soul-crushing depression (living a “gray existence”), and whenever Sam asks where his mother is, John won’t give him an answer.

When a mysterious blank book arrives in the mail and Sam draws in it, his drawings inexplicably become reality, and Sam and his father, with the help of a dancing elephant dressed in an Edwardian suit and matching vest, set out on an epic quest to bring his mother back from beyond the grave.

His mother is in a hellish place called Dread City; to get there, the unlikely trio must survive numerous challenges, such as crossing a nightmarish sea of faces and escaping marauding centaurs.

The story’s lyrical writing style and surreal nature make for an effortlessly page-turning read, although a few sequences run too long. The lessons the characters learn during the journey are also noteworthy, as father and son come to understand the healing capacity of honesty and trust, and embrace their own inner strengths.

Although tonally comparable to Frank. L. Baum’s classic The Wonderful Wizard of Oz, the raw emotional intensity and thematic force is the story’s real power. “A life lived without love,” says Sam’s father, “without even the desire for love, is a life without meaning.”

This is an action-packed, heartfelt romp through a young boy’s imagination, complemented with striking illustrations. Think of it as L. Frank Baum falling down Lewis Carroll’s rabbit hole into the afterlife. It’s sure to entertain readers of all ages.