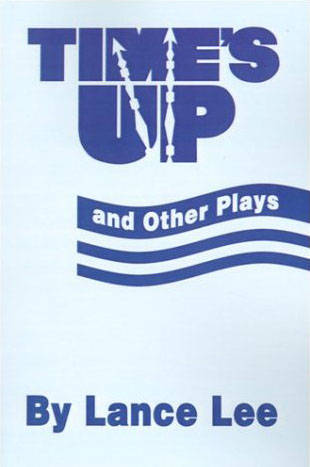 Times Up and Other Plays

Divorce, one of the most soul-searching and symptomatic dilemmas of our century, remains a subject that theater mostly neglects. We have had Oliver Hailey’s “Father’s Day” and essentially that’s been it.

But now there’s playwright Lance Lee and “Time’s Up” — a dual monologue that accomplishes three things: It takes potshots at divorce; plays amiable hell with its attendant life-support system, the “shrink” and achieves both through an inventive presentation that divides the stage into separate therapists’ offices, with the “patients” addressing the audience directly for relief from their marital indigestion.

It’s a novel idea, not without its rewards nor, unfortunately, its limitations. Macie Thompson (Barbara Trembley) and Bob White (Gary Wood) are both married, not to each other, and trying to sort out complicated circumstances and feelings that have brought them to the edge of divorce and, just as surely, to their respective shrinks.

“Time’s Up” re-creates the mild cacophony of jangled egos, shattered nerves, cries of self-justification and whimpers of self-admonishment by having its two principals talk separately and/or together in sometimes overlapping phrases — sometimes in overlapping thoughts — with occasional solo outings to promote clarity and continuity.

Because of the isolation of the characters, the form never involves us fully and its effects tend to be mostly gloss. Macie is a slightly ludicrous woman in her middle 30s whose marriage to Marv had all the excitement of Romper Room. Marv wasn’t much of a lover and Macie has learned to take refuge in material possessions and Mai Tais in the afternoon. Other husbands complain of their wives growing old. Marv complains that Macie won’t grow up. Angry, confused, amused, bemused and sexually frustrated, Macie is a south Beverly Hills version of The Ladies Who Lunch. And Trembley lends her a colorful aura of dumb blonde humor that almost makes up for a certain discomfort with her body and a high-pitched whine that can be grating. More relaxation here would help immeasurably.

As for poor Bob White, the complexity of his emotions might drive even a therapist to drink. “I’ve never had such a good marriage and been so unhappy with it,” he claims for starters. Not a simple fellow, Bob, just … unhappy. The victim of a wife so perfect that she made him feel small (“I’d complain, she’d comply”), a mother who always knew how to get him to do what she wanted and a mistress who placed the deadly constraint of no constraint at all. “That’s what’s doing me in all these years,” he agonizes, “being loved.” And it’s taken all this time and pain to discover that being propped up by others isn’t the same as standing on your own.

Wood gives an intense, sensitively coiled performance that savors every uncertainty and lunges at every ghost. There’s humor in it, too, but more circumstantial than indigenous.

All in all, “Time’s Up” is a witty exercise that examines without exacerbating our 20th–century paranoia. Lee’s use of the therapist’s byword, “time’s up,” to abruptly cut off each scene is a masterfully unstated indictment of the inhumanity of our courts of last resort.

Director Joel Rosenzweig’s orchestration of the unrelated characters underlines this satirical bite. It has polish, pathos and a cool hand on the pain behind the slick facades. This is not an era given to much profundity and both Lee as author and Rosenzweig as director take care not to forget it.

Set designer Garvin Eddy’s sleek chromes and polished woods add the crowning touch of impersonality to an environment that is decidedly unhealthy for human flesh and blood.

When Equity-waiver productions are done as professionally as this one, going to the theatre is certainly worthwhile. Not only is this a must-see ply, but this is a new group in a new theatre to take notice of — under the combined banner of Theatre-in-Progress and Investors For Themselves. In the tradition of The American Place Theatre, Trinity Square Repertory and St. Clement’s in New York, this group has taken over a meeting room in the First Methodist Church of Hollywood, called it Theatre Upstairs, and created an ideal setting for intimate plays.

And that is what "Time’s Up" is — so intimate that you feel you are intruding on a private meeting, which you are. Lance Lee has written two monologues broken up into seven scenes, both taking place in the offices of marriage counselors at a crisis clinic over a period of six weeks. They are interwoven so cleverly that you can see the similarities of the two characters’ problems, yet you are listening to two separate stories. The couple never meet, never see each other, they just happen to have their sessions at the same time in adjoining offices. Both are going through the crisis of divorce. Lee’s insight into marriage, why it is and why it ends, is brilliant. Such lines as “I’ve never had such a good marriage and been so unhappy about it” and “truth is pure pain, no wonder we avoid it’” are so on target that every adult in the audience can feel the arrows hit the bullseye. This is not TV soap opera dialogue, but honest, unexaggerated feelings coming out of realistic situations.

Gary Wood and Barbara Trembley run the gamut of emotions, both are so good that you’d swear they are talking about their own lives. Wood shows great range and depth in his portrayal of the everyday man, Bob White and his white Charger, who is unfulfilled and unable to cope. He is particularly touching with his sensitive handling of the man’s most private feelings. Ms. Trembley is Marcie Thompson, an over-30 housewife who still talks about Mommy and has a couple of nips in the afternoon to get her through the traumas of housework. It is a well-defined and perceptive performance, and she handles the comedy particularly well.

Joel Rosenzweig has directed with much thought and care, splitting the audience’s focus so that both stories are easily followed. The set by Garvin Eddy shows the personalities of the unseen counselors and gives the production added polish. Jeanne Haney does a masterful job of lighting and Nadia has coordinated the costumes to show the passage of time between visits.

To be nit-picky, a silent custodian, obviously used to fill time for costume changes, should either be directed more specifically or eliminated altogether, as it looks now like he was a last minute addition: he brings an otherwise superior production down to an amateurish level.

Currently at the intimate Theatre Upstairs in the First Methodist Church of Hollywood (Franklin at Highland Ave.) is the premiere of talented playwright Lance Lee’s “Time’s Up,” a two character psychological “Whydunit” about the winding down of a 18 year “dream marriage.”

We’ve all met the combatants before: Macie and Bob, a couple of middle-income types (she’s a housefrau, he’s an insurance executive); two cars (a leased Mustang and a station wagon in constant need of repairs); three kids; vacations in Hawaii; active in PTA bake sales and Indian Guides.

So where — and why — did it all go so wrong? Writer Lee skillfully — at times brutally — uncovers the layers and blurred edges of our “statistically correct” couple and gets to the basic and unresolved lie of their almost two decades of so-called bliss. It’s more than a matter of communication lapses (the current cliche and cureall). “Time’s Up” at its core is about the living lie of their lives — a crazy compound of past guilts, shames, self-abuse, and a kind of willful need to destroy one another which echoes “Who’s Afraid of Virginia Woolf?”

All of Lee’s trauma-drama takes place as an audience confrontation (we are the crisis center therapists), and Macie and Bob unravel their separate stories in a series of seven sessions, each concluding with a clinical voiceover saying “Time’s Up.” And it is.

Where writer Lee’s play falters — despite a coupe of awfully fine performances by Gary Wood and Barbara Trembley and the deft sensitive direction of by Joel Rosenzweig — is in the cold-as-ice clinical set-up of things. Somehow Macie and Bob should go at it one-on-one in the best O’Neill tradition. Otherwise we’re told about things without experiencing them first hand.

Still it’s a compelling evening, full of genuine impact. Credit Garvin Eddy with the set, Nadia with the costumes.

Lance Lee, author of TIME’S UP at THEATRE UPSTAIRS, describes his play as a psychological “Whydunit”, and that’s exactly what it is. The curtain rises on two separate therapists’ offices where, unknown to each other, Bob White and Macie Thompson simultaneously confront the audience in a verbal duet that probes their marital troubles. Before the evening is over, the audience — their therapists — have come to understand, and care about their two “patients”.

Lee’s concept of ending each scene with a curt “Time’s Up!” from the analyst’s offstage voice works, serving as a theoretical punctuation mark for each scene. More importantly, his dialog in fresh and his insights into his two characters penetrating. When Bob, for example, realizes that his wife’s only crime was loving him too much, and later, thinks that he just wants to humiliate himself, the revelations strike us as recognizable truths. And when Macie plaintively cries, “Time to be free!” we want her to be, too.

One reason is because Barbara Jean Trembley plays her with such grace and naturalness that she appears not to be acting at all. She is Miss Everywoman, and we suffer — and occasionally laugh — along with her, even though, at 34, she talks an awful lot about “mommie”.

Gary Wood is also fine as the confused patient on the right. H oozes masculine charm and has extraordinary stage presence.

This delicate play requires an exceptionally subtle directorial hand — and that’s what it gets from director Joel Rosenzweig. This reviewer was astonished to learn that Ms. Trembley’s performance was her first on any stage. It augurs well not only for Trembley’s acting career, but for Rosenzweig’s as a director.