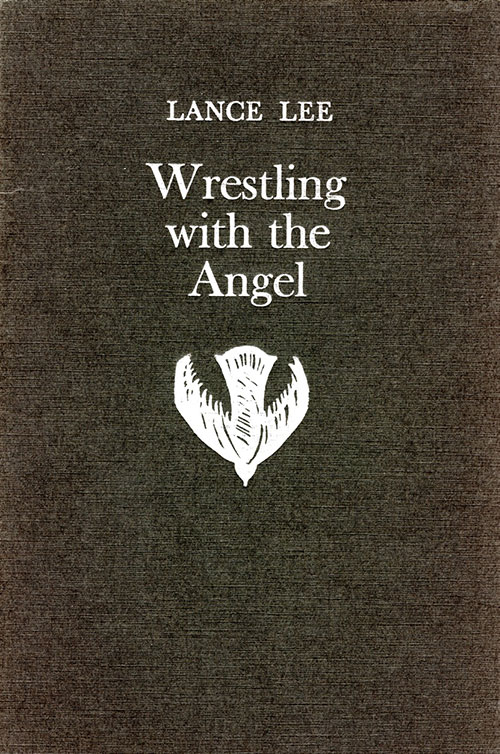 Wrestling with the Angel

In Genesis, Jacob wrestles with an angel, defeats it, and forces it to bless his life. In Lance Lee’s “Wrestling With The Angel”, a man wrestles with life itself, trying to make it give him “some living moment” that will transform him so he no longer hears in the heart of everything — daily routine, work, even passion — the hollow sound of silence. Many of these poems undoubtedly reflect Lee’s personal life (near death of a daughter, cancer surgery of wife, Polish ghetto experiences of ancestors) but in naming the first section of this book, “A Modern Life,” he invites us to see his protagonist as a middle-aged American Everyman who, judging from outward appearances, has a good marriage and lives a happy life. But the inner emptiness is always there, prompting him to ask, “Who am I? What is my life for?” Wrestling with this angel, preoccupied with himself, he fails to give his wife or their marriage enough attention.

But there are moments of transformation, almost of transfiguration. In “Backrub” he rubs his wife’s bare back, noticing “that footlong scar where they cut her cancer out,” noting how “no matter how hard I rub, that length of white/ stays white, dead white,” until finally she turns around and they begin to make love “as we make one body, share one scar, rubbing/ at that long white question, that death,/ as near to us as skin.” In this moment they are truly married: not till death do us part, but because death do us join — because, as husband and wife, we are living and dying together.

The emptiness of “A Modern Life” is essentially spiritual — that of a man who, in “My Hunger For Meaning,” tells us that his grandfather still remembers ancient tribal rituals but that he himself, a child of the twentieth century, finds no meaning in those all-but-forgotten rituals or in such institutionalized abstractions as God and State.

The second section of this book, “Bread,” (implicitly suggesting that one does not live by bread alone) explores three possible avenues of escape from the quietly pervasive nothingness of “A Modern Life.”

One possibility is love, but the half dozen love poems here document the failure of love — or the failure of the would-be lover to be worthy of the love he seeks. A second possibility is the transforming power of art, but the only life significantly transformed by art is that of the artist. Finally, in “To Make Bread,” Lee’s struggling protagonist discovers the simple Zenlike answer: one must throw oneself into every aspect and activity of one’s life with total abandon.

“To Make Bread” is the penultimate poem of the book. The last poem shows that those “who live here,” wholly in the world, experience the world as an earthly paradise. In saying this, Lee echoes the This-Is-IT, Be-Here-Now focus of Zen. This poem, and so the book, concludes with the lines, “Anonymous lives, light, the still lavender/ of nightfall, grass — these are all.” And yet Lee has titled this last poem “Would It Was Enough.” Clearly, it isn’t. Nothing is. Lee’s Everyman wrestles with his angel. He cannot defeat it. The emptiness, the silence at the heart of things, is in him.

The poems in “Wrestling With The Angel” articulate the joy and terror of living fully in the physical world. The “angel” is both the angel of death and the angel that represents the divine, the ethereal, all that is not mortal. It is this struggle, even more so than that suggested by the Biblical allusion, that the collection’s title defines.

Lee is clearly writing in the tradition of Whitman, albeit a more sober Whitman. He is a poet with more taste for the dark side of things. As Whitman celebrated what is various and good, Lee realizes that darkness has its own particular variety and beauty. One might call him a naturalist of the tragic for, like a naturalist, he examines with great interest and without preconceptions all the elements that make up the tragic. Like Galway Kinnell, Lee’s gaze is on the things of this world, looking almost always to the natural world for illumination. In “Bats,” for example, he finds a metaphor for the self:

Outside bats hunt down the helpless
with their sharp black wefts of song.
I slide downwind with them, violent and small.

The metaphorical use of nature is well-trod ground, but Lee’s metaphors are never worn or mundane. “We argue in the house like a change of seasons,” he writes in one poem, and in another “waiters gull around us.”

The language of this poetry is both lush and spare. One finds no extra words or syllables, yet there is a fullness in that language that belies its sparseness, and in which one wishes to luxuriate. One small example:

And when I take her she’s like
the last apples of autumn, almost
too sweet beneath the bitter skin.

There is much that is original and deeply felt in this work. Most of the poems are highly charged lyrics that contain some thread of narrative. I am reminded, when reading Lee, of the comment someone once made of Moby Dick: “It’s a damn good fish story.” Lee’s poems have surface accessibility (the “good fish story” part) but an underpinning of deep complexity, if one wishes to find it.

Two of the most stunning poems of the book are love poems: “Resisting Love” and “Backrub.” In “Resisting Love” Lee displays his dramatic abilities (he is a graduate of Brandeis and Yale School of Drama and founded the MFA program in playwrighting at USC):

If you had not wanted me,
your hands quick and you yielding
"to any touch;
if it had been morning or morning
evening;
if I had discovered need, the slack flesh
grown responsive
from blind touch;
if there had been discovery in your eyes,
the sense of ‘Oh, oh yes’;
if sex was not the field we fight
against our merging
for selfhood on:
if it had not been expected of me
I might have loved you…

The poem continues to draw the reader on with its dramatic series of “ifs” until we are finally allowed a sense of closure with Sweet woman, sweet flesh, hungry wife, / surprise me, be bold, offer / the unknown, the deep / thing in each of us never known.

In “Backrub,” a striking, poignant poem, the narrator details a special kind of backrub:

She leans forward, clothes fallen to her waist,
my hands stroking down to the twice-broken bone
at the spine’s base
slipping lower to the lobed softnesses I knead
with wide fingers, then up
to where they cut her cancer out,
tracing that footlong scar over her shoulder
toward her breasts:
no matter how I rub, that length of white stays
white, dead white
when blood runs in our lovemaking.

Much of what Lee writes has a subtle violence to it, of the kind implied in the title. In one poem he indicates that violence is the fodder for writing — the narrator of the poem “feel(s)/out the necessary violence/we still root in/for our words.”

There is not a poem in this collection that does not lay bare some new bit of intelligence and insight. My only complaint is that some of the poems seem to stop too soon, almost as if they don’t recognize their own grand possibilities. In “Strawberries,” for example, the casual use of the present tense to refer to a daughter who is dead makes the accident that caused her death repeat itself, and the blood flows from that street far away to the strawberries her mother is picking. When the poem ends with “We hurry to pay./ We hurry to leave”, I am slightly disappointed; I want the associations pushed farther — to their limits. The ending feels a little too quick in what is otherwise a deeply compelling poem.

But this is small criticism in a book filled with wondrous language, passion, and attention. In a poem about a daughter who has survived a tragic accident and coma, Lee writes “we live always in danger/ of great loss and need of/ heart-wrenching gifts.” The last could almost be a description of the poems of this collection, “heart-wrenching gifts,” important, elemental, powerfully and confidently written. Pablo Neruda wrote that poetry must be like bread, that nourishing and fundamental, that necessary. When I say Lance Lee’s poems are like bread, it is the highest compliment I can give.